Each uses a corn-derived sugar or corn syrup called dextrose.

From leading lagers to pastry stouts to pale ales to IPAs, dextrose is widely used across the beer industry by brewers large and small in large part because it cleanly and efficiently converts to alcohol during fermentation and has a neutral taste. In short, during the fermentation process, yeast eats these simple sugars and converts them to alcohol and carbon dioxide.

As Anheuser-Busch pointed out in a series of low-performing television spots aired during Sunday’s football game, both Miller Lite and Coors Light use corn-derived sugars during fermentation, which aids in making them light-bodied, easy-drinking beers with reduced calories and carbohydrates. None of these sugars are in the final product.

Bud Light, the brand behind the ads, uses the same trick. It is brewed using rice, another fermentable carbohydrate that contributes very little flavor. (But no yeast, apparently? The brands new nutritional panels don’t make mention of a key ingredient in the beer-making process.)

So what’s behind the attack?

MillerCoors CEO Gavin Hattersley has his own suspicions on Bud Light’s motive.

“Bud Light is starting this fight for one simple reason. They are scared. Coors Light and Miller Lite are making inroads and Bud Light doesn’t have an answer. We’re getting under the competition’s skin, and we’re ready to take more of their market share too,” he said in a Sunday note to distributors. 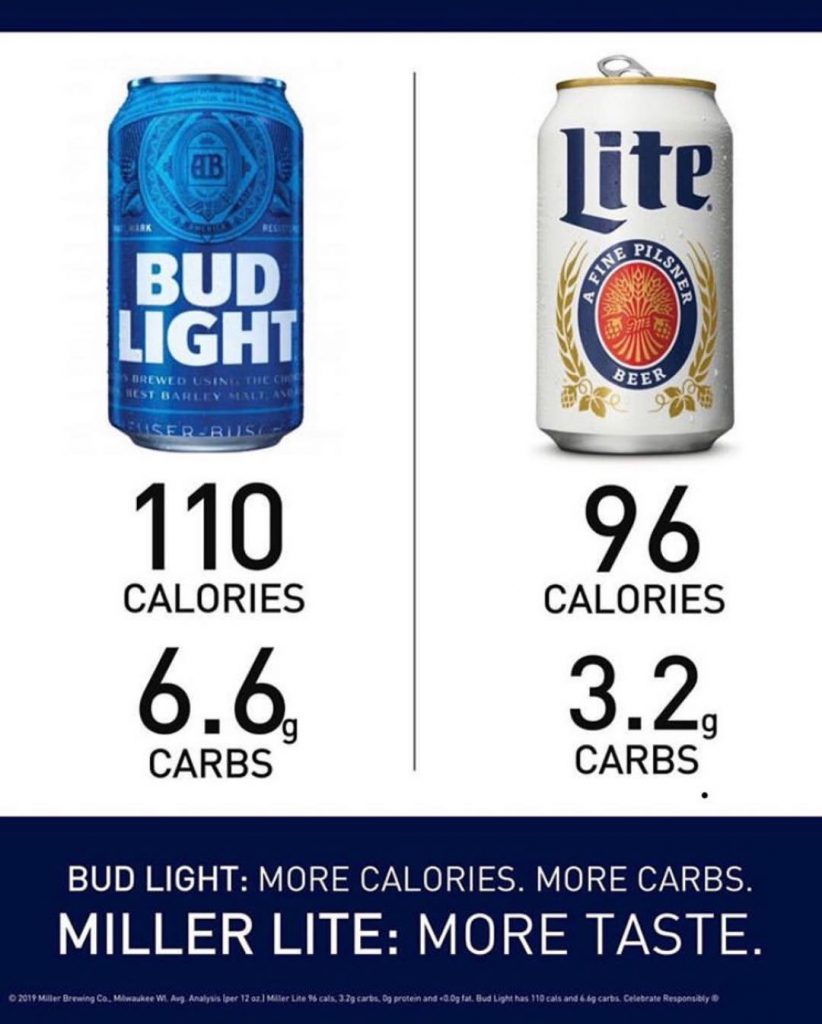 “We’re proud of our beers, we’re proud of our ingredients, and we’re happy to have this fight any day of the week because we know this: While Bud Light has more calories and more carbs, Miller Lite has more taste and Coors Light is the World’s Most Refreshing Beer.”

Among several media outlets to weigh in on Bud Light’s attempt at a broadside, Men’s Health took up the question of whether corn syrup in beer is bad for you. The answer? “It doesn’t matter whether your beer contains corn syrup, because those refined sugars are eliminated in the fermentation process anyway,” the publication wrote. “In short, it’s no big deal if the sweetener is coming from corn syrup or milk sugars or Gisele’s tears of joy if no residual sugars are left after fermentation.”

Craft brewers know this. Vinnie Cilurzo, owner and brewmaster of Pliny The Elder-maker Russian River Brewing Co., recommends using up to 5 percent dextrose sugar in the kettle in order to brew the dry, lighter-bodied beers he prefers. “This will give you a drier beer while not contributing any additional body,” he told the American Homebrewers Association.

And other craft breweries that bottle condition their beer, or allow the beer to ferment and carbonate naturally in the can or bottle, use corn-derived dextrose and other sugars during that process. That includes craft stalwart Sierra Nevada Pale Ale. And an entire class of Belgian ales, Kate Bernot noted in a piece on the Takeout.

“If corn sugars are fine for the ‘best’ double IPA and Belgian grand crus in the world,” Bernot asked, “why wouldn’t they be fine” in light lagers?

“We don’t have anything against corn syrup, we just don’t use it for Bud Light. Consumers want transparency and we’re providing it,” said Josh Gold, an Anheuser-Busch spokesman, in an email. “It’s up to them to decide what beer is right for them. Bud Light’s Super Bowl commercials are only meant to point out a key difference in Bud Light from some other light beers.”

Then there’s the other question of whether the series of Bud Light ads moved the needle for the brand, which remains the largest beer brand in the U.S. despite shipments dropping 6.7 percent in 2018, its largest percentage decline on record, according to Beer Marketer’s Insights.

Adweek named the first spot as one of five moments during the game that didn’t end well with the internet. “We’re not sure the brand knew the debate it was starting. People were confused why the brand would choose to promote that fact of all things,” the publication said.

Ad Age likewise gave the ads a thumbs down, saying “unfortunately … there isn’t much in the way of wit, other than the suggestion that Bud Light doesn’t use corn syrup, which no doubt has been plaguing the drinkers of Bud Light.”

Perhaps the only stakeholders the brand did manage to rile up were the nation’s corn growers, which tweeted after the ad: “America’s corn farmers are disappointed in you. Our office is right down the road! We would love to discuss with you the many benefits of corn!” The National Corn Growers Association then went on to thank Miller Lite and Coors Light for supporting the industry.

The original form of this article appeared on MillerCoors’ website.