We were fortunate enough to sit down with Coppertail owner Kent Bailey and Coppertail head brewer Casey Hughes recently, and we learned a great deal about Coppertail Brewing Company. Here are ten fun facts that you may not have known about this iconic Tampa Bay craft brewery:

DID YOU KNOW THAT:

10. Night Swim Porter was the beer that almost didn’t happen. The beer was almost going to be eliminated from the brewery’s lineup prior to opening, but runners at a local 5k loved the beer so much that they convinced the brewery to keep the beer permanently. 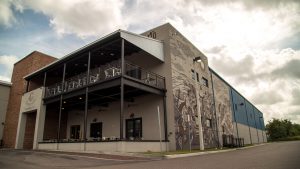 9. The building that Coppertail now occupies used to occupy was a mayonnaise factory and an olive cannery in a past life.  While it still maintains some of its former life, the building has morphed quite a bit in the four years Coppertail Brewing has occupied it.

8. The brewery brews 50 barrels of beer at a time.  That’s 1,550 gallons of beer in one batch!  The brewery started with a tremendous amount of capacity, but has grown into it slowly.

7. Coppertail’s Florida Weisses evolved to bottles after they grew to enormous popularity in the tasting room.  These beers were tasting room favorites, but they have only been in bottles for a short while.

6. The Alpha Hunt Series of IPAs is all about experimenting with new hops.  Coppertail Head Brewer Casey Hughes (and the brewing staff) love to brew with experimental hops and the Alpha Hunt beers are the perfect opportunity for them to do so.

5. The beer called “Whoops” is named for a happy accident in the brewery.  Casey was supposed to use these ingredients on a saison, but he “accidentally” treated a Berliner weisse instead.  The tasty accident was so well received that now the beer is bottled and sent throughout the state.

3. Every beer label is about the search to find the mythical Coppertail monster that (according to brewery legends) roams Tampa Bay.  Look for clues on the Coppertail’s whereabouts on labels, six-pack holders, and faux newspaper clippings with the beer.

2. Coppertail Brewing Company has won a medal in every Best Florida Beer Competition since the brewery opened.  Check the results at bestfloridabeer.org!

1. Coppertail Brewing’s head brewer Casey Hughes has been brewing in Florida since before he was old enough to drink beer.  Before he was rocking the brew house at Coppertail, Casey was brewing in Key West during the craft beer resurgence of the late 1990s.

Check out the original interview with Coppertail Brewing for more exciting details on this Tampa Bay craft brewery and check out our Beer Finder to score some Coppertail brews near you!