Celebrate Repeal Day with a beer

Today’s Repeal Day marks 84 years since the 21st Amendment became the law of the land and sales of alcohol became legal once more.

Since the early 1800s, groups of people had been lobbying Congress to pass a law outlawing the sale of alcohol.  By the turn of the century, these groups had become a force in American politics and continued to gain momentum until Congress proposed and passed the Volstead Act on October 19, 1919 over the veto of President Woodrow Wilson.  After the Volstead Act was passed, special agents from the Treasury Department began destroying almost any forms of alcohol they found. 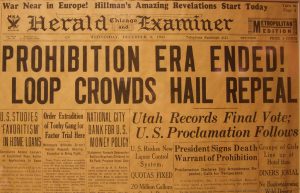 On this day in 1933, Utah became the 36th state in the United States to ratify the 21st Amendment, bringing an end to the era of national Prohibition.  This day became known as Repeal Day and is celebrated throughout the United States as the day when alcohol was made legal again for the entire country.  President Franklin D. Roosevelt, who had campaigned on the issue of repealing Prohibition, famously said, “I think this would be a good time for a beer.”

This Repeal Day, here are a few beers that commemorate the spirit of American entrepreneurship and moxy in fermented form.  Check out one today and see how far American brewers have come since Repeal Day.

Allagash Brewing White Ale (5.2% ABV): One of the most recent craft brewers to partner with Team Cone, Allagash Brewing’s history goes back to 1995 when Belgian beer enthusiast Rob Tod opened a brewery in Portland, Maine. Rob welded together a 15-barrel brewing system and began brewing one beer only: Allagash White. In 1999, Rob hired brewer Jason Perkins to direct Allagash’s brewing beyond just White, and Jason added more Belgian-inspired beers, a barrel-aging program, and one of the first sour beer programs in the United States. You can still taste Rob’s (and all of Allagash Brewing’s) passion for Belgian beer in every pint of Allagash White. Try one to toast Repeal Day and enjoy the beer that built Allagash.

Dogfish Head Brewery SeaQuench Session Sour Ale (4.9% ABV): A recent innovation, Dogfish Head Brewery classifies SeaQuench Ale as a “session sour,” which is a great way of saying that is an approachable delight that is for sour lovers and sour skeptics alike!  This beer has been a phenomenon lately, garnering attention for both its purported health benefits and for its thirst-quenching powers.  The beer itself combines the light body of a kolsch-style ale with the salt character of a gose-style ale all the while sharing the tartness of a Berliner weisse.

Sierra Nevada Pale Ale (5.6% ABV) in 1980, Sierra Nevada Brewing’s founder Ken Grossman create a beer loaded with Cascade hops, named for the mountain range. The beer has continued to grow and has developed a devout following in the forty years following. Sierra Nevada Brewing has grown to be one of the largest craft breweries in the United States and Pale Ale, in all its hoppy goodness, is the beer that has led many to fall in love with craft beer. And at a moderate 5.6% ABV, it’s possible to raise two Pale Ales in honor of Repeal Day.

All of these beers, and the innovations that caused them, have been made possible by American craft brewers inventing new recipes and pushing the boundaries of beer, but would not have been possible without Repeal Day and the freedom that the 21st Amendment granted.  Enjoy that freedom today by going to our Beer Finder and celebrating Repeal Day with your next favorite beer.